The Flight of the Earls and Multyfarnham Friary 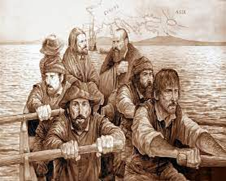 In September 1607 Bishop Brady died in Multyfarnham Friary. In accordance with his own wishes his body was laid to rest in the cloister, the burial place of the friars, and immediately under the door that led to into the church. The exact location of his grave, like the graves of the many friars who died in Multyfarnham, is unknown. But somewhere within the precincts of the venerable Friary, he and his fellow-Franciscans lie at rest.

In the same month there took place one of the most notable events in Irish history, an event that became known as the Flight of the Earls. On Friday September 14 1607, in the small fishing town of Rathmullan in County Donegal, Hugh O’Neill, Earl of Tyrone, and Rory O’Donnell, Earl of Tyrconnell, accompanied by their families, some close friends, and relatives, sailed from Lough Swilly for Spain and mainland Europe. These chieftains, who could not live with the new English order, sought refuge with England’s main enemy, in the hope of either making a new life for themselves, or of living to fight another day.  Irish Franciscans at home and abroad were closely connected with the departure of the Earls.

In 1608 Sir Cahir O’Doherty led a short-lived rebellion which lasted only eleven weeks. During these weeks O’Doherty captured Culmmore Castle and with about one hundred men, Derry was taken on the April 19 1608. On the July 5 1608, Sir Cahir O’Doherty was killed near Kilmacrennan while leading his men against a contingent of English and Irish soldiers marching towards Doe Castle, the last stronghold in rebel hands. With its leader dead, the rebellion was over.

In 1608 Fr. O’Mullarkey, a native of Tirconnaill, a former Minister Provincial and a widely travelled friar, fell under government suspicion after the ill-starred rising of Sir Chair O’Doherty. Among the sequels to O’Doherty’s rising, not the least interesting is that in which a friar, most notably O’Mullarkey, was involved at Multyfarnham Abbey.

Knowing that he was a marked man, for whose capture a warrant had been issued, and having had one narrow escape in Donegal, Fr. O’Mullarkey sought refuge in the Friary of Multyfarnham. The authorities tracked and trapped him in the Friary, only to be robbed of their prey in a manner as dramatic as it was unexpected!

In the Friary church, morning Mass commenced with some strangers amongst the local people. The friar began Mass. Suddenly the strangers sprang from their places, rushed to the altar, and seized the priest. It been done swiftly and effectively.

No less swiftly the report of what had happened spread among the strongly Catholic people of the locality. With their fury aroused they seized whatever rude weapons they could lay their hand on and rushing towards the Friary, they fell upon the friar’s captors, and rescued the friar. This spontaneous action demonstrated the loyalty of the local people to their friars and their religion.

Now more than ever, Fr O’Mullarkey was a targeted person. His only hope of safety lay in quitting Ireland. After many difficulties and dangers, he reached Spain, where he seems to have remained for the next twenty years. While resident there, he wrote, in Spanish, an account of his experiences in Ireland during the insurrection of Sir Cahir O’Doherty. He also served as chaplain in the regiment of Sorley Boy MacDonnell until, in 1623, age and infirmity compelled him to resign.

He then begged that a passport be given him for Ireland. His request was granted, and he returned to his native land, where he once more laboured until with old age and bodily infirmity, he died in 1627.