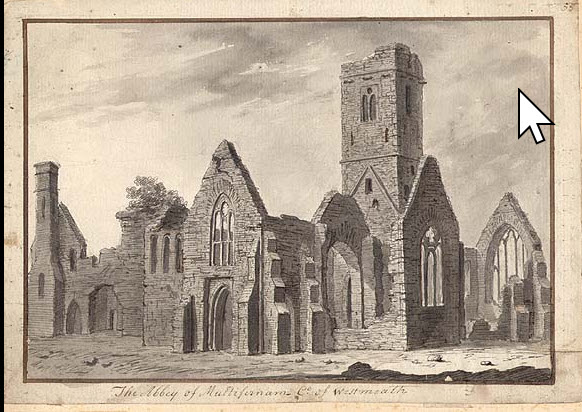 Before the end of the year 1601, the friars returned to their ancient home, now a gaunt ruin. Desolation had fallen upon the Friary of Multyfarnham. Without roof, doors, or windows, silent and lonely the wind swept through, and rain soaked the charred limestone walls. It was a tragic spectacle. If Sir Francis Shane had not razed the friary to the ground, he had done all else in his power to ensure that the friars would not return to it.

Brother Donagh Mooney OFM was the first to come back and, emboldened by his courageous example, those members of the community who had escaped in the darkness from the clutches of Sir Francis Shane soon joined him. By Christmas day of 1601 they had built a small house to take the place of the burned-out friary and were once again living in the community. Sir Francis Shane’s ruthless policy had failed in its purpose and once more this sacred place began to function again. Father Mooney, writing in 1616, states that from the day of the friars return, they had clung to this wonderful place. Though they lived in primitive huts erected within the walls of the burnt-out friary and in the garden, the friars accepted it in preference to the greater comfort of living elsewhere.

When the fraternity had re-assembled and settled into their new abode, the Guardian, Fr. Nehemias Gray OFM, undertook the work of restoring the friary. It is most likely that this great task had the backing of generous benefactors, among others, the Nugent’s of Delvin and Donore. The Lady Chapel, or southern transept and some of the conventual buildings were soon re-roofed.
With the accession of James I to the English throne, Irish Catholics hoped for a fair measure of religious toleration and, relying on that hope, they began to assert themselves and rebuild their churches. As events soon proved, they were to be disillusioned.

But the restoration work was not yet to be completed. On the Feast of St. James in 1604, the friary was raided and burned yet again by a party of troops under the command of Francis Rushe. Fr. Matthews OFM tells us that the community at that time included Dr Brady, Bishop of Kilmore, Fathers Edmund Grady, John Phelan, and Eugene Friel, Brother Terence Morya, cleric, and Brother Louis, a lay brother.

Fr. Eugene and Brother Terence found safety in flight, but the other members of the community were arrested and brought to Dublin where they were imprisoned. The aged and weakened Bishop of Kilmore, Dr Brady, now residing continuously in Multyfarnham, was arrested for the third time. As his great age and bodily infirmities made it impossible for him to stand, or even to sit without proper support, the soldiers came to realise he was a burdensome prisoner, whereupon they stripped him naked, and threw him into a cluster of nettles. Some people who chanced to pass by sometime later, discovered him, clothed him, and brought him back to Multyfarnham.

When the raiders had departed and calm returned in Multyfarnham, the friars came back to survey the destruction wrought by the raiding party, and to rebuild their huts yet again. No doubt they grieved to see that those portions of the church and domestic buildings, recently restored, had again been completely destroyed. Money, time, and labour had been for nothing and once again the unending task of rebuilding commenced.