Edward Lorenz is a scientist who studied weather patterns. Even as a boy he was fascinated by the weather. He was intrigued by weather prediction. With the advent of computers, he saw the chance to combine mathematics and meteorology. By the early 1960s he was able to construct a mathematical model of a weather system. The system was reasonably successful. In 1961 one of his programs ran awry. He checked his figures and there was no major mistake. There were, however, small mistakes. These mistakes were minor, but they caused the read-outs to be out of sync. Small changes can affect weather patterns. In popular culture this became known as the “Butterfly Effect.”

In reading Coleridge’s “Rime of the Ancient Mariner” I see how prophetic his poem is. He wrote the poem in 1797 and it was published in ‘Lyrical Ballads’, along with works by William Wordsworth. The poem was originally called “The Rime of the Ancient Mariner.” Coleridge wanted to use archaic language to give a feel of an ancient tale. The poem recounts the experiences of a sailor (the mariner) who has returned from a long voyage. The mariner stops a man who is on his way to a wedding ceremony and begins to tell his story. The wedding guest becomes fascinated as the story progresses.

The tale begins with his ship departing on its journey. Despite initial good fortune, the ship is driven south by a storm and reaches the icy waters of the Antarctic. An albatross appears and leads the ship to safety.  Then the wedding guest notices a change as the Mariner continues his story. The mariner tells him that he killed the albatross.

“God save thee, ancient Mariner!
From the fiends that plague thee thus!–
Why look’st thou so?” – With my cross-bow
I shot the Albatross.”

The rest of the poem goes on to explore the profound spiritual and material consequences of this random violent act. He has disturbed a delicate balance of nature. The poem goes on to tell of the death of the other sailors and of the survival of the mariner. He describes the situation thus:

“Alone, alone, all, all alone,
Alone on a wide wide sea!
And never a saint took pity on
My soul in agony.” 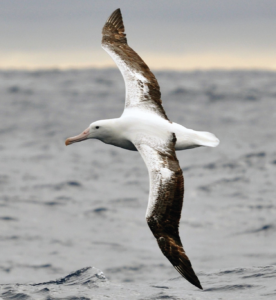 The story of the killing of the Albatross is something we have seen in our time. Chris Jordan is a photographic artist and cultural activist. He says that in order for people to really become inspired about cleaning up the planet we must first grieve over what we have lost (Scientific American, November 2009).

He photographed the dead albatross slain on Midway Island in the Pacific ocean. The seas of the world, even those remote southern waters, have been filled and polluted with the throwaway plastic garbage of our consumer society – empty bottles and containers and so forth. The Albatross would fish these waters and they would mistake the plastic for food and feed it to their young. The young birds would find that their stomachs were so full that they had no room for real food. Thousands of them died. Jordan photographed the remains of the dead birds. The gratuitous killing of the albatross is repeated again. In 2017 Jordan made a film about this devastation simply called ‘Albatross’. Jordan says:

“For me, kneeling over their carcasses is like looking into a macabre mirror. These birds reflect back an appallingly emblematic result of the collective trance of our consumerism and runaway industrial growth.

Like the albatross, we first-world humans find ourselves lacking the ability to discern anymore what is nourishing from what is toxic to our lives and our spirits. Choked to death on our waste, the mythical albatross calls upon us to recognise that our greatest challenge lies not out there, but in here.” 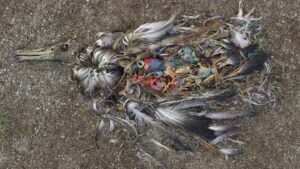 The Mariner can only be saved when he realises that he is guilty and must take responsibility for his cime. He begins to pray. The first stage of his recovery begins, as so often with people recovering from trauma, with the return of sleep. He says:

“Oh sleep! it is a gentle thing,
Beloved from pole to pole!
To Mary Queen the praise be given!
She sent the gentle sleep from Heaven,
That slid into my soul.”

Mary had already been invoked in the poem in the brief prayer “Heaven’s Mother send us grace.” Later on in lines 297-300 we are told “by the grace of the Holy Mother, the ancient Mariner is refreshed with rain.” Eventually he comes to safety and confesses his sin. We too need to turn again to God and confess our sin – take responsibility for ourselves and our world.
Pope Francis tells us in the encyclical “Laudato Si”: