Homily for the Third Sunday of Easter – Kieran Cronin OFM 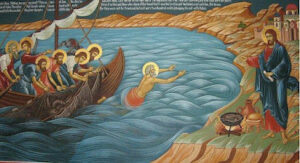 St Peter is the hero of this Sunday’s readings, transformed by the Spirit after Pentecost as revealed in the Reading from Acts, and being called to mission in a touching resurrection appearance of Jesus. Let’s focus on that gospel account in John, recalling that this evangelist reveals deeper truths in his mention of ordinary events by means of symbolism.

Peter and his friends, including Thomas mentioned last week, have met the Risen Lord twice, but they are tired of waiting around in the upper room. It is time to get back to some kind of normality, so Peter suggests fishing while waiting for some further message.

But the ordinary and mundane are suddenly invaded by the supernatural. The fishermen have failed to catch a thing all night when a stranger from the shore suggests a different move – the other side of the boat! It is Jesus pointing them away from failure to amazing success in a great catch of fish. There is a simple message we can immediately take from this event. How often do we adopt strategies or plans in life to solve our problems, but they fail because they are not the Lord’s plan for us? Sometimes we are stubborn enough to stay with these failed strategies, for example, trying to achieve our ends by violence. But the apostles learn the key message, which is to listen to the instructions of Jesus through his Spirit. May we learn the same lesson. Throw your net out in the direction Jesus points and see what you will find!

Now this net is a rich symbol in John’s gospel of the Church, the new community which is born out of the death and resurrection of Christ. The reference to an exact number of fish in the net is unusual but is thought to refer to all the different species of fish in the sea and also the different nations of the world. The mission for Peter and the others is to draw everyone into the net of God’s loving community. Is there not also a message of confidence in God that this community will embrace so many people with different cultures, but though straining, it will never tear? (In an earlier gospel, Jesus calls his disciples when mending their nets. Could this be a suggestion that the old religion of Judaism is failing in contrast to the new covenant where the nets are so much stronger?)

And Peter has a special role in this fishing expedition. It is brought out in the detail that the net is so heavy that the disciples aren’t able to haul it into the boat but have to tow it ashore. But when Peter meets Jesus on shore, he is so full of power that he on his own is able to haul the net to Jesus at his command! Jesus shows his disciples where to fish and empowers them to carry out the work. And this power is somehow also connected with the meal Jesus has prepared for them. Once again, as in the story of the disciples on the road, the missionaries will be nourished by their common celebration of the sacred meal, the Eucharist. It will be their daily bread, their constant encouragement and joy, because the Lord will be with them.

This is the second call of Peter and his friends and the more important one. At the beginning of the ministry of Jesus he calls them to follow him, and they do, but in a confused and imperfect way. But this is their time of training, including their falling away at the passion. As Jesus now challenges Peter on the quality of his love, we find a mature man, less confident in himself, less boastful, ready to trust in the power of the Spirit, which will come soon to make him into a new creation. His mission is to preach the good news that God has a wonderfully wide net that wishes to draw us all into his love. And once we are caught in that net of love through our baptism, we can also embrace our mission to be fishers of men and women like Peter.