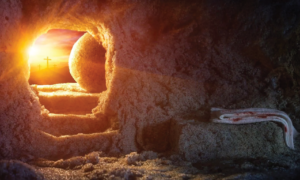 In our Bibles we are used to seeing the Gospel of Mark ending with chapter 16:1-20. However, in the 18th century it was found that Mark ended in v.8. The ending in the early manuscripts reads:

“And they went out and fled from the tomb, for trembling and astonishment had seized them, and they said nothing” (Mk 16:8).

This is the ending of the scene where the women, Mary Magdalene, Mary the mother of James, and Salome come to the tomb. They find the stone has been rolled away. Then they see a young man sitting by the tomb and he tells then:

“You are looking for Jesus the Nazarene who was crucified. He has risen! He is not here” (Mk 16:6).

Then they run away and are afraid and say nothing to anyone.

We know from other sources such as Paul in 1Cor 15:3-8 that there were resurrection appearances. Why did Mark present the women as afraid? They are confronted with a great mystery. Jesus had died a horrible death but now he is alive. This was not the resuscitation of a corpse. It was not the return of Jesus in another form. He was dead but now he lives. Something new was taking place. Things could never be the same again.

In the Song of Songs, we read “love is as strong as death” (Song 8:6). Now we see that love is stronger than death. Jesus is resurrected and death for him is no more. He calls us to come to him and receive new life.