In the early years while the friary church was being constructed the first friars lived in a humble abode. The remoteness of the friary in those early days ensured a place that was well suited to the practice of solitude and recollection. 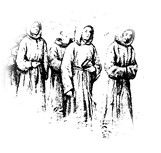 Surrounded by marshes, water, and thickly wooded countryside there were no roads; a narrow path threaded its uncertain way through this terrain to the Friary. Silence lay all around and only the sounds of nature disturbed it; the cry of the curlew, the lowing of the cattle, the bark of the fox. It was surely a place for prayerful, secluded lives. And here the friars lived.

Once the church was built the friars lived in a building attached to it, all of it constructed of local stone. Here, they offered Holy Mass daily, chanted the Divine Office, ministered to the spiritual needs of their benefactors and of the scattered population around them. There was little to disturb the even tempo of their lives.

The pages of history are silent about Multyfarnham for almost the first three hundred years of its existence. We know, however, and it is what we should expect, that the Multyfarnham Friars were among the first in Ireland to revert to strict observance of the Franciscan Rule. That was in the year 1460. And it was about that time that the graceful belfry was added to the Church. Though the vicissitudes of the centuries have left their mark upon it – the belfry is not as high now as it once was – for five hundred years it has stood, a silent witness of scenes tranquil and turbulent, and a familiar landmark to countless generations of Multyfarnham people.

The years passed quietly and prayerfully at Multyfarnham for nearly three centuries. It was the calm before the storm. Early in the sixteenth century, about the year 1520 ominous rumblings – heralds of doom, of coming disaster, must have been heard at Multyfarnham. Strange things were happening in Dublin, and in other parts of Ireland. The Catholic faith, the faith of Patrick, of Brigid, and of Colmcille, was being transformed into something very different; or at least an attempt was being made to transform it.

The Franciscans were deeply concerned at these changes, it is very likely that rumours of them filtered through to the fraternity at Multyfarnham. They must have known what it is, day by day, to see the great deadly forces of irresistible oppression, of ruin, drawing closer and closer, and to look on at the face of overwhelming power. And then, about the year 1540, the storm broke over the quiet valley of the Gaine. The era of desolation, of suffering, of sorrow, of exile, or of torture and death had dawned.