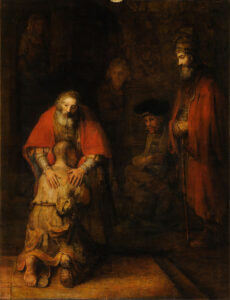 In Gospel’s like today’s Gospel, people are often told to put themselves in the position of one of the major characters of the story. So, we might identify with the Prodigal Son. I suppose we’re all sinners in one way or another; we’ve all travelled away from our Father, we’ve squandered the inheritance, the graces He has given us. Yes, we can all see ourselves as the Prodigal Son, coming back and apologising again and again. And then again, it is very important, sometimes, that we identify with the older son, the older brother, who is so unforgiving, so self-righteous, and so resentful. That can be us as well. And hopefully, in our better times, we can be like the Father, so forgiving, so tender, so forgetting of the past, not reminding his son of his sins.

But I think that today, I identify more with the servants in today’s Gospel. I think that sometimes we miss out on some of the less important people in these stories. Like the extras in films that never get listed in the credits. And sometimes it is the extras, it is those people who don’t seem to be important, who can teach us a lesson. How often do the servants appear in this story and what is their role?

Well, the first time they appear is when the young man, the brother, begins to think of home and how comfortable it was there. And he thinks, not just of his father but of his servants, how those paid servants were treated so well, so kindly, by their employer. And aren’t we all servants of God, dear friends, treated so kindly by God our Father. And not only servants but His children. You see, in the ancient world, the word, “family” wasn’t really used in the way in which we use it. In the Gospels and in the New Testament in general, the word for “family” is “household” and a household, especially a prosperous one, contains and consists of not just the members of the family but the servants too.

In this story, you could say that the servants, too, are a part of the family and that’s what the boy thinks of;

“Even if I can be a servant, I’ll be doing so well because my father is so kind to his servants.”

And then, when he comes home, and the father embraces him, what does the father do? He calls for a party! While it is the servants who are going to put on the party – they have to go off and kill the fatted calf. But before that, the father says to the servants: “Get out the best clothes, get him a ring for his finger, get him sandals for his feet.” It is obvious, isn’t it? This boy is coming home in rags. He can’t enjoy the party unless he is prepared for it.

And therefore, it is the servants who are going to do this; bringing out the good clothes, the ring on the finger, the sandals on his feet. There is something symbolic here. We could identify with those servants. Is it like we are doing for others when we forgive them? Are we too, putting out the best robe, making them feel at home, giving that meal, whatever it may be? That is what we do as servants. I think that priests in confession in particular, see themselves in that way, as it were, commanded by the Father to prepare His children for forgiveness, to prepare for the celebration of the party. It is the servants who are important here as well.

And then when the party is in full swing, and the older son comes back, what does he do? He calls one of the servants and it is the servant who brings him the good news of his brother’s return. Isn’t that what the servants of God are called to do as well – to bring the Good News of God’s forgiveness and of God’s love? And all of this, when you think about it, is in the service of the celebration, of the party. It is this party that is central to this Gospel and to two other parties that make up this Chapter 15 of St Luke’s Gospel. It is a trilogy of parables, with the same message. It begins with the story of the woman who has lost a coin. She sweeps out her house and she finds the coin. And what does she do? It doesn’t stop there. She calls her neighbours to come and celebrate with her.  And then the man who has lost a sheep goes out and finds it. And again, when he brings it back, he calls for a celebration. And in this story of the Prodigal son, there’s a celebration, a party, for the return of the Prodigal son.

This is telling us that when it comes to forgiveness of sin, it is not about shame, it is not about guilt. It is ultimately about celebration. The celebration of God and His saints and angels in heaven, and the celebration that we too should have, whenever we see a person changing their ways, becoming better. We pray that it might happen to President Putin and the Russians these days, that they will return to the Father and celebrate in a peaceful way.

And so, dear friends, when I think of confession growing up, how I hated it, going into a dark box, kneeling down on a hard board and speak to the grill, was it really a celebration? Was this an imitation of the parable of the prodigal son?

These days, we can also have communal celebrations of forgiveness, where we come together to celebrate the forgiveness of God. I think that as Christians, we are always having parties in our hearts. If we could only have them, recognising how God wants us, always, to really celebrate his forgiveness and that is why it is appropriate today that we have Laetare Sunday, a Sunday of joy, where we celebrate the Father’s love for us.