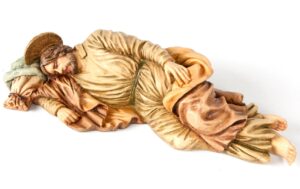 Pope Francis has spoken on several occasions about his devotion to St. Joseph. He says that Joseph is his favourite saint. This is because Joseph reveals to us how God reveals his plan to us in silence and in rest. Pope keeps a statue of a sleeping St Joseph on his desk, placing prayer requests under it.

On a trip to the Philippines in 2015 Pope Francis said:

“I have great love for St Joseph because he is a man of silence and strength. Joseph’s rest revealed God’s will to him. In our daily moments of pausing to rest from the daily work and demanding obligations and activities, God is also speaking to us. But, and here’s the catch, like St Joseph, once we hear God’s voice we must rise from our slumber, we must get up and act.”

Matthew reveals today the central role played by Joseph in the birth of Jesus. A man of honour, Matthew says, whose goodness of character is further shown in his actions/responses to God’s voice. When he wakes up from his vivid dream, he immediately acts on it and takes Mary into his home. This openness of Joseph to doing God’s will was crucial to all that followed; his partnering and protection of Mary, the birth of Jesus, his care for the child who was to “save his people.”

With Easter seeming far off – a month away now – and war and prices soaring, it leaves us full of preoccupations anxiety and busyness. So, maybe this hour here in Multy is an opportunity to rest a bit, still the mind, to rest here with God and to listen to what God might be saying to us.