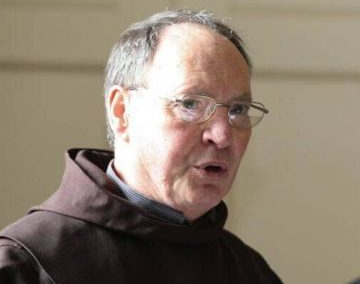 Pat Cogan OFM died peacefully in Waterford on October 13, 2022. He was 77 years of age and was predeceased by his sister Kay, brother Jim, and brothers-in-law, Vincent, Derry, and Brian.

Pat was born in Cork City in 1945 and joined the Franciscan Order when he entered the novitiate in Killarney in 1962. After his Simple Profession the following year, Pat’s studies brought him to Galway and later, Rome, where he was ordained priest in 1970.

His first appointment was to Ennis Friary. Then in 1978 he went to Waterford where he was to remain for the rest of his life. It was in Waterford that Pat founded Respond Housing Agency in 1982 as a response to the housing crisis in that city. However, under his direction the work of the agency spread throughout Ireland, and even to Kokstad, South Africa, where Irish Franciscans worked.

Pat, imbued by the Franciscan ethos, was a driving force for change in the development of social housing in Ireland as he sought to provide meaningful solutions to housing insecurity and homelessness. He remained involved as CEO and a director until 2016.

There are now almost 6,500 properties that Respond owns and / or manages across Ireland, with almost 15,000 tenants supported in their homes and a wide range of services in the community.

Declan Dunne, CEO of Respond added: “The loss of Fr Pat is a source of sadness for all of us at Respond. He worked tirelessly in the housing sector for many years, working to build an Ireland where everyone can have a home to call their own and where individuals, families, and communities are empowered to reach their full potential. His founding principles of a right to housing and social justice continue to guide Respond today, and we are committed to continuing the work begun by Father Pat.”

“I am deeply saddened to learn of the passing of Father Pat Cogan, a man who did so much to tackle homelessness and housing insecurity throughout this country. Since he founded Respond 40 years ago, Fr Pat tirelessly and passionately advocated for the most vulnerable in our communities, helping provide quality and safe homes for thousands of people. A native of Turners Cross in Cork, Fr. Pat was a man of deep faith as well as action. His dedication to social justice continues to this day through the work of the Respond Housing Agency. Fr. Pat leaves a lasting and impactful legacy through the generations of families able to call a home their own.”

Pat’s funeral Mass took place in the Franciscan Friary, Waterford on Saturday October 15 and he was buried in St. Mary’s Cemetery, Ballygunner.